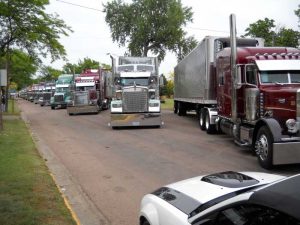 Habeck Trucking is a small company, and we like to have the personal touch; whether it’s with the drivers, or our clients. And our drivers make the trucks theirs, and their fellow drivers become like family.

SD Wheel Jam is the perfect opportunity to bring that atmosphere into perspective. With entries from several states and Canada, the show centers on the trucking industry. Uniquely the event also includes a motorcycle and classic car show all ran consecutively, so there truly is something for everyone. 8 Habeck trucks made entry into the show this year, and 19 kept the business going out on the road.

The drivers on the road teased about keeping things going while others were loafing off, and the ones at the show reflected pride in the fleet. It isn’t about “your” truck as much as “our” trucks. For weeks, the drivers have been fitting time into their schedules to polish, and add the chrome, for some it’s just about helping each other out. And when the dust settled, or more directly when the rain lifted there were many trophies for the shelf, and deserving pride in the company they represent. 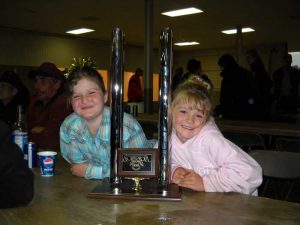 Owner / Operator Unit 429 received a Show & Shine Trophy, and his girls understand that it’s a family project. They invested many hours into it also.

Company Drivers Unit #23 has 2 new trophies for their shelf, including 1st in “Best Tractor Trailer Combo 2007 & newer”. They also placed for the second year in a row in the “Best of Show” class where they received the 2nd place trophy. 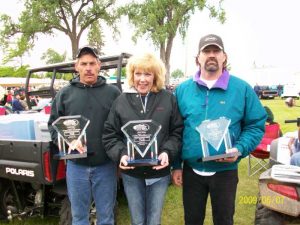 The driver for Unit 6 had his daughters wedding to attend, so another company driver stepped in and made sure the truck made the show; bringing home yet another trophy. Proudly displaying the “Best Tractor Trailer Combo 2000-2006″

A major part of the weekend though was spending time, and enjoying the representation of the transportation industry. Habeck Trucking takes pride in the Best of Fleet trophy for the 2nd year in a row, but it’s not all about the equipment, its also the drivers and company support that make it possible. 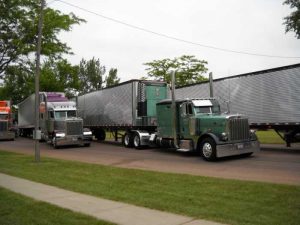